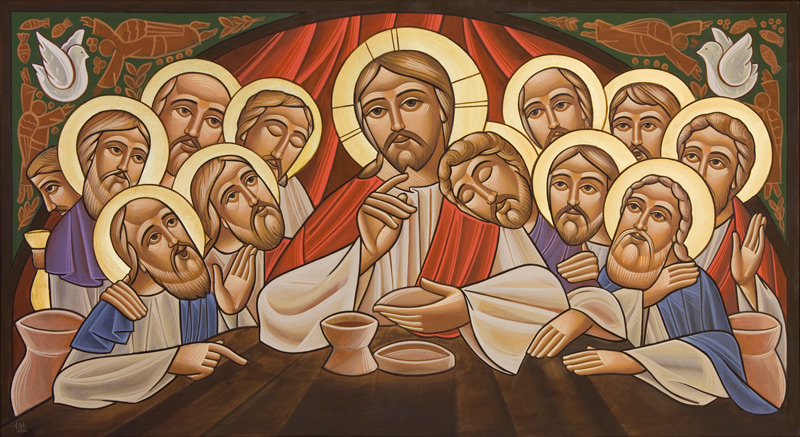 In His incarnation through His Ascension, we see demonstration of God’s mercy and love triumphing over His justice and judgment. Christ renews man’s image, reconciles him to God, ransoms him from death, and gives him victory over the devil and death. But Christ did not only conquer death for us. Sin which was itself the cause of a curse and death also needed to be dealt with. Humanity was still also at enmity with God because of sin. Thus the salvation of Christ also provided a solution for sin, renewal of man, and a reconciliation with God. The Word became flesh so that He could represent the fallen humanity in all aspects; to renew it, sanctify it, purify it from sin, reconcile it to God, give it victory over sin and death, and elevate it to His heavenly glory—all in Himself.

The Lord Jesus Christ in Whom the fullness of the Godhead dwelt bodily, not only deified humanity by His incarnation, but was also a representative of humanity which He assumed in all its fullness. He reversed Adam’s disobedience with His obedience and set in His humanity a tangible example of holiness, purity, humility, meekness, forgiveness, and love. As One Who fully represents humanity—even in the likeness of sinful flesh (except that He Himself committed no sin), He ascended to the cross taking upon Himself the condemnation, curse, and death that was the just penalty for transgression. He condemned sin in His flesh and dealt with sin once and for all—His body becoming that very sin that was nailed to the cross and was condemned. What Christ suffered in His humanity was our due because of sin, yet He became sin and a curse for us. As Moses lifted the bronze serpent and brought healing to those who were wounded because of the serpent, as a result of their transgression, Christ died and was lifted on our behalf to bring healing to all who were wounded by the sting of sin and death–so that all who look upon Him would be delivered also from the condemnation of the Law. Thus He bore our sins and curse; the chastisement of our peace was upon Him. By his stripes we were healed (Isaiah 53).

Thus Christ is our Healer, but He is a much more than a healer. He is our High Priest, blameless Sacrifice, and Mediator with God. The Lamb of God is our Savior and our very own Righteousness. The Destroyer passed over the houses of the Israelites because of the blood of the lamb on their doorposts, which delivered them form condemnation and death. Likewise, we also are delivered by the Body and Blood of the Passover Lamb Who was slain for our sins. As High Priest and Mediator between God and man, He offered Himself as a sweet smelling savor that He might offer us by and in Himself unto God the Father. In this Sacrifice of love and through His suffering, He reconciled man to God by becoming our propitiation and advocate before God the Father. The law of sin and death no longer has any power over us and we were liberated from the condemnation due to us because of the Righteous Law of God—which we transgressed. Having justified us by His Blood, He abolished the enmity between man and God as a result of transgression. Through faith in Christ, we are justified by His grace and His righteousness. Our sins are washed away by the waters of baptism in the Blood of the Lamb. They are continually cleansed by the same Blood through confession and tears of repentance:“they have washed their robes and made them white in the blood of the Lamb.” (Rev 7:14).

Having died with Christ to sin and been buried with him in Baptism, we are resurrected also with Him to a new and heavenly citizenship, by which we are worthy to call God our Father. God gives us of His Holy Spirit, making us partakers of the Divine nature–though Whom we are also united by partaking of the Eucharist. Thus God “deified” us by not only taking what is ours, but giving us what is His. Our fallen nature is again restored to the image of God and renewed daily by the Holy Spirit Who works in us to transform us to the image of Christ—empowering us to live according to the Spirit and no longer according to the sinful flesh: “I will put my laws in their minds and write them on their hearts. I will be their God, and they will be my people” (Heb 8:10). And even if we sin again due to ignorance, negligence, weakness or even deliberately, but repent, Christ in His infinite mercy continues to be our Advocate and propitiation with the Father for the forgiveness of all repentant sins, for all generations.

Finally, in His Resurrection, Christ triumphed over the physical death which overtook us. David was the representative of the children of Israel as he gave them victory over Goliath and the Philistines who reviled and enslaved them—having given Goliath a fatal blow to his head. Goliath himself represented the old Serpent who reviled, accused, and enslaved humanity because of sin. Likewise, Christ in our humanity descended to Hades through the cross to strike a crushing blow to the head of the Serpent who was the gatekeeper of Hades “having disarmed the powers and authorities, he made a public spectacle of them, triumphing over them by the cross.” (Col 2:15). Christ ransomed humanity from sentence of death, redeeming us from death with His own life. United with humanity, Christ conquered death by His resurrection as evidence of the victory humanity received in Him over corruption and mortality. Sin, death, and our Accuser were crushed “because it was impossible for death to keep its hold on him” (Acts 2: 24).